The man beneath the cone

For more than 140 years, the statue of the Duke of Wellington and his faithful steed Copenhagen was just another Glasgow monument.

But after staring out from Royal Exchange Square undisturbed since 1844, a traffic cone suddenly and mysteriously started appearing on his noble napper in the mid-1980s.

As fast as it was removed, the orange ornament was returned – and it soon became a battle of wits between the pranksters and the powers-that-be. 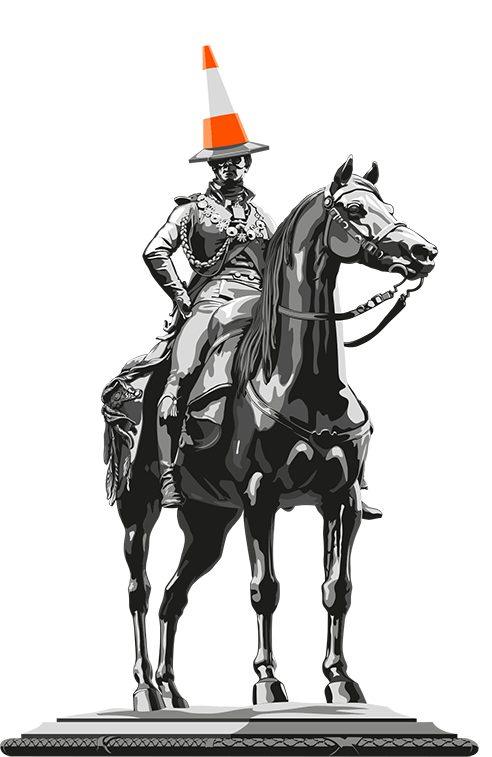 Since its first appearance, various jobsworths have tried to stop the ducal decor in the name of health and safety, but in Glasgow, you may as well try to stop the rain from falling.

Plans to raise his plinth or install CCTV to deter the Duke’s comical coronation were loudly opposed, with a ‘keep the cone’ campaign launched to preserve his hallowed headwear.

Unlike Wellington, the council eventually admitted defeat and the cone has been a permanent fixture ever since, proving that Glasgow spirit will always prevail.

Downlo on the Duke

Today the Duke and his conical crown are one of the most instantly recognisable and most-loved landmarks in the world.

Edinburgh may have its castle, and Big Ben may be a big shot south of the border, but nothing sums up a city like the celebrated soldier and his bizarre bunnet.

Playful, unique and instantly recognisable, it’s Glasgow through and through – just like the gin that bears its name.

[email protected]
We use cookies here to measure our web traffic. Is that cool?
Aye

Please confirm that you are of legal age to consume alcohol in your current location.